New York in May

May is one of New York City’s loveliest months. The temperature ranges from 12-26°C, so it’s usually warm but not hot, and without the humidity that you’ll find during the summer months. Flowers bloom, trees are leafing out, and it’s a wonderful time of year to explore the city’s many parks. We have three events in New York In the month of May. One is Ninth Avenue International Food Festival, Ethnic cuisine, international music and dance, and more than a million hungry festival goers in Hell’s Kitchen between 42nd and 57th Streets. The second one is Washington Square Outdoor Art Exhibit. Hundreds of local and international artists and artisans hawk their wares at this massive sidewalk art fair over Memorial Day weekend. The third one is Fleet Week, the Hudson River Parade of Ships kicks off a week of musical performances, military demonstrations, and Memorial Day observances that celebrate the U.S. Navy, Marines, and Coast Guard. New York is a state of North-eastern United States and is the 27th-most extensive, fourth-most populous and seventh-most densely populated U.S. state. New York is bounded by New Jersey and Pennsylvania to the south and Connecticut, Massachusetts, and Vermont to the east. The state of New York, with an estimated 19.5 million residents in 2015, is often referred to as New York State to distinguish it from New York City, the state's most populous city and its economic hub. It has the highest volume of tourism of international and domestic tourists, receiving a sixth consecutive record of nearly 70 million visitors in 2015. Tourism had generated an all-time high US $61.5 billion in overall economic impact for New York City in 2014, pending 2015 statistics. Approximately 13 million visitors to New York City were from outside the United States, with the highest numbers from the United Kingdom, Canada, Brazil, and China. Over 700,000 students are enrolled in New York City's over 122 higher education institutions, the highest number of any city in the United States, including over half million in the City University of New York (CUNY) system alone in 2015. In 2005, 3 out of 5 Manhattan residents were college graduates, and one out of four had a postgraduate degree, forming one of the highest concentrations of highly educated people in any American city. New York City is home to such distinguished private universities as Barnard College, Columbia University, Cooper Union, Fordham University, New York University, New York Institute of Technology, Pace University, and Yeshiva University. The public CUNY organization is one of the largest universities in the nation, comprising 24 institutions across all five boroughs: senior colleges, community colleges, and other graduate/professional schools. Many Scientific Events, meetings and conferences on science and technologies takes place very frequently.

Warm weather, fewer crowds and lower costs make the month of May the best time to visit Canada. The tourist season has just officially begun and the nature is in full bloom. The chill in the air, but with the snow largely gone and spring flowers blooming, many lodges start to reopen and national parks become more accessible, allowing visitors a chance to explore in relative solitude before the peak season starts.

May is perfect for whale watching on the Atlantic coast, with humpbacks, minkes and belugas frequently sighted.

The complete gamut of summer activities is in full swing. Golfing has begun in the western provinces and spring ski deals are still available. You can go hiking and even camping if you are really interested.

For the he urban adventure in a Canadian city, May offers pleasant temperatures for walking in its scenic old towns and exciting urban landscapes.

Not to mention that the prices are affordable during the month of May to visit Canada compared to the other months, which makes it the best time for developing nations to share their scientific expertise by attending conferences.

May is a wonderful time to visit Germany. After a long winter, the country sheds its layers and welcomes the beginning of the warm season with traditional German Easter celebrations and many spring festivals. May in Germany is full of annual festivals and holidays, plus signs of a country re-awakening. Spring fairs in cities like Stuttgart and Munich will remind visitors of Oktoberfest with singing, dancing, and much beer drinking, but in reality, Oktoberfest is just one of Germany's many festivals throughout the year. Erster Mai in places like Berlin and Hamburg are all about labor and involve protest as well as partying. Few things more beautiful than the lanes of flowering cherry blossoms in spring. Enjoy the fruits of their labor with a fruit wine festival. This is also the time of year when Germans favorite vegetable, Spargel, begins to make an appearance. Easter is one of the biggest celebration will be dedicated in Germany. Easter is the most popular holidays in Germany, marking the long-awaited spring of spring. It attracts many visitors with their traditions such as colorful eggs, chocolate Easter bunnies, spring fairs, and, of course, the Easter egg hunt originated in Germany. The rising spring temperatures, you’ll also see prices for airfares and hotels climb, even if they are still lower with great deals and discount packages than other months in the year.

South Korea in May

The spring weather especially the Month of May in South Korea is close to being perfect. It is very pleasant, right after the winter, it attracts most of the locals and as well as visitors to tend to head towards the mountains during this period. This is a best period, the tourist numbers are high. South Korea is a spectacular country that has maintained its culture and tradition for hundreds of years. It is also about rice paddies and mountains studded with pine trees. It is full of immaculately constructed monasteries, temples and beautifully touching Confucian ceremonies. To explore all these, May is one of the best times to visit South Korea as the cherry blossoms will be in full bloom, even in cities like Busan. The weather is awesome, and the perfect time to explore popular landmarks such as Incheon, Suwon, or explore the beautiful national park of Seoraksan. You can even head to Dosan Seowon, to experience the Confucian lifestyle, in a traditional academy. The best time of year to visit South Korea is generally considered to be the spring months of April, May & June. These two seasons days are typically sunny with comfortable optimum temperatures.

Zurich is a popular tourist destination in Switzerland. In may the snowfall would have just reduced to bearable levels. Moreover, the crowds from the ski slopes would have also left, and the summer crowd would not have dripped in yet, and you will be able to find most accommodation and travel tickets for cheaper. The weather in Switzerland might be slightly wet during this season, the wildflowers will be blooming all across the valleys, and a ride on the cable cars will offer stunning views. Zurich is the largest city in Switzerland, it is also known as the Canton of Zurich. It is located in north central Switzerland to the north western tip of Lake Zurich. The official language spoke is German. Zurich Airport is located less than 11 kilometres from northeast of the city in Kloten. The key attractions are the churches gross Munster and Fraumunster, the Zurich museum of art and Swiss national museum .Zurich is the leading financial centre and global city. The Greater Zurich Area is the financial centre and home to many international and financial companies in Switzerland. The renown Swiss stock exchange was established in 1878 and 55 of the largest companies have their head office at Zurich. The city is supplemented with heritage and culture along with modernity and economic progress. This makes a great podium to development and research in many fields Known worldwide for its banks, Zurich is the financial Center of Switzerland. It has the largest airport and railway station in the nation, making it the first introduction to Switzerland for many foreign tourists. It also has a reputation for being clean and well-organized, and is often ranked as having the highest quality of life anywhere in the world. Zurich has a mixture of appeal for many different travellers. History enthusiasts will love the tall clock towers and gothic spires, culture buffs will enjoy the museums and universities which have 21 Nobel Prize winners to brag about and everyone will love the hundreds of hip clubs and world-class restaurants. Opernhaus Zürich, Lindenhof, Lake Zurich are few famous spots in Zurich and Zeughauskeller Mesa and Restaurant Kokoro are few well-known restaurants which are well known for the authentic Swiss food.

May is the beginning of summer with average temperatures rising to 36°C. Humidity is low and rainfall is extremely rare. In May the sea temperature hovers around a very comfortable 25°C to 28°C, allowing you to work on your tan and swim at Arabian Sea. If you go out, be sure to drink lots of water, apply plenty of sunscreen and stay cool by taking regular dips in the sea. The sun shines intensely for 10 hours, and stays up until just after 7pm. When it comes to clothes, think loose, long linens and cottons that will help protect the skin while allowing it to breathe. Accommodation rates at the hotels are at lowest during the summer, when temperatures are scorching and it’s far too hot to enjoy the outdoors. To attract more visitors, many hotels offer excellent deals and sometimes even free meals at their onsite restaurants. The best time for shopping is during Dubai Summer Surprises, when a wide range of retailers offer special promotions and discounts for 45 days starting in Mid-May. We have three festival in the May month. One is Al Gaffal Tradtional 60ft Dhow Race. The race includes roughly 150 traditional third version traditional boats and typically draws 4,000 participants sailing the waters of the Gulf. The second one is Isra and Mi’raj(Isra and Mi’ra marks the time the Prophet Mohammed travelled from Mecca to the Dome of the Rock in Jerusalem in one night), it is the one of the holiest days in the Islamic calendar, celebration includes prayers during the night and in some places, the lights stay on throughout the night as well. The third one is Dubai Tango Festival, held in mid-May (May 15-20). The four-day Dubai Tango festival brings tango lovers from around the world with live music and performances every night with Tango workshops and a festival dinner. Dubai’s most popular attraction Burj Khalifa provides the opportunity to experience “At The Top,” the highest viewing platform in the world. To avoid the biggest crowds and longest lines to visit Burj Khalifa is during the summer months. Dubai is the biggest and most populated city in the United Arab Emirates. It is located on the southeast coast of Persian Gulf and it is the capital of the Emirate of Dubai, one of the seven emirates that make up the country. Dubai alone has more than 60 shopping centers, including the world's largest shopping center, Dubai Mall. It has emerged collectively of the world’s leading international business centers and regional hubs. With liberal infrastructure and First skilled atmosphere, Dubai has quickly become the simplest place to try and do business within the geographic area. Due to city’s strategic location, untaxed living and robust economic outlook. May is the perfect time for meetings and conferences. It's is the perfect platform for scientific expertise to share and join at the International meetings on science, technologies and business. 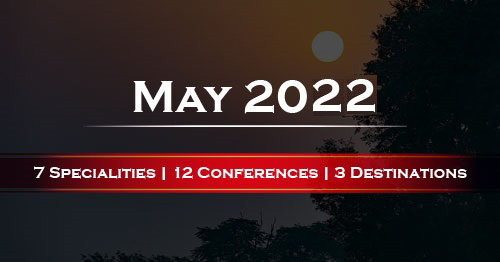